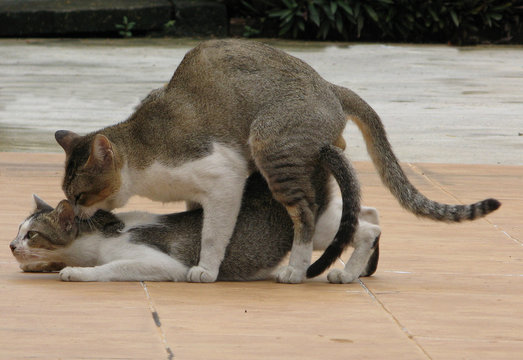 Cats reach sexual maturity between four and 12 months, but unlike hooman females, queens do not have an oestrus ‘cycle’ as such. Estrus, the time at which they are receptive to mating, is rarely accompanied by any swelling of the vulva or discharge. In the Northern hemisphere, felines are likely to be ready to mate between March and September, although breeding ‘season’ may be all year round in indoor cats, as increased daylight and warmth activate the hormonal system.

A queen comes into heat for between one and two weeks, and this pattern is repeated every two to three weeks. She desires a sire, and the hormones released cause her to call loudly in her pursuit of a suitor; these may take the form of trills and yowls. As well as her increased vocal habits, a female may be increasingly affectionate, rubbing herself up against you, and she may even roam in search of an available mate.

When a queen finds a sire, she will crouch low with her chest down and forelegs bent, but her rear legs raised, in a stance that is known as lordosis. She will move her tail to the side and tread her back paws from side to side. The male will mount her and usually bite her neck during mating, but the entire process from start to finish may take less than a minute, as felines in the wild do not wish to leave themselves vulnerable to attack through lack of vigilance.

Cats are induced ovulators, with the sire’s barbed penis stimulating the release of an egg 24 to 48 hours after mating, therefore the process can be noisy, and the queen will often scream following an encounter and take up to a day to recover. This may be due to the pain involved; however, she will also groom herself and roll, which could be a way of relieving tension, removing the scent of her suitor, and spreading that of her own.  Pusses are aggressive reproducers, and it is not uncommon for kittens from the same litter to have different fathers, as females may mate up to 40 times during each estrus. Gestation in felines is approximately 63 days from the date of ovulation, with queens in their prime between the ages of one and seven years. Breeding is not generally recommended in cats younger than 12 to 18 months, due to the strain of queening on a female that may not be fully mature, which may cause complications for both herself and her kittens. It also takes a great deal of effort, finance, knowledge, and time to be a responsible breeder, so spaying is an excellent way of ensuring unwanted pregnancies do not occur. ❤